You might want to check out the alternative version (which is more recent).

Update: I was just informed (see comments) about another fork of Notational Velocity which has implemented MultiMarkdown already. It uses a HUD to display the preview, which may be preferable to some users. Check it out either way, the modifications are far more involved than mine. 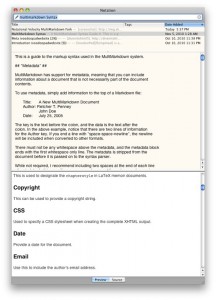 I assume that, since you’re here, you probably know what Notational Velocity and MultiMarkdown are. The brief version would be:

Notational Velocity is a note-taking, scratchpad type of app with amazing search abilities and great keyboard navigation. It syncs with folders of text (ergo, Dropbox) and SimpleNote.

MultiMarkdown is an extension of John Gruber’s Markdown which adds a lot of missing functionality such as tables, image attributes and footnotes.

I just wanted to be able to use some of the syntax I’ve grown accustomed to elsewhere with my Notational Velocity notes. In the process, I made some minor visual tweaks, but nothing crazy. I also updated the CSS for the preview pane to be a little cleaner and handle the footnotes and other new elements.

The project had already been forked for Markdown preview, so I just worked from that. The code is available, and you can download the final product below.

Minor Update: Just fixed SmartyPants support, download and repo updated. That’s it for now, but I would like to sit back down and add a “Copy as HTML” button to the preview, when I have more time.

Another Update: Added a tab to view XHTML source of the preview, mostly for quick copy/paste to HMTL-based editors and fields.