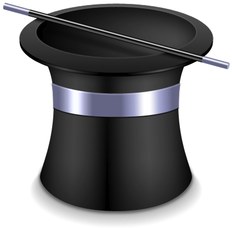 From my hat full of stupid Mac tricks:

I use a lesser-known (and very old) program called Spark for defining most of the keyboard shortcuts on my system. I have a shortcut for every one of my most regularly-used applications, plus shortcuts for various AppleScripts, shell scripts, system functions, etc. I know there are more recent applications which do the same thing, but I’ve had everything set up in Spark for ages and it still works a treat. Seriously, if you want an application launcher, it’s worth checking out (and free). However, you can use this tip in any app which lets you assign a hotkey to an AppleScript (FastScripts, BetterTouchTool).

So, anyway, I’ve grown to like applications which have a system-wide hotkey that toggles them between foreground and hidden. It makes a lot of sense for certain applications which you check and then move on from. Sparrow, Twitter, etc. I wanted that functionality in more apps, so I run this as the AppleScript in Spark, replacing the app name with whatever I want to toggle.

Thanks to D Curtis and Zettt in the comments, I’ve put together a more elegant script. It does the same thing without shelling out, and the syntax is cleaned up. Thanks guys!

One more update: after some testing, it looks like D Curtis’ first script below is much faster for some reason (I’m assuming that getting the “bundle identifier of (info for (path to application appName))” takes some extra resources). I recommend going with this one instead, but I’m leaving both up for reference: