This is part of a 3-part series covering some of my favorite apps for 2012. Yesterday I posted about some of my favorite Mac apps this year. This post is dedicated to apps available on both Mac and iOS with sync capabilities. This is by no means an all-encompassing list, but rather a few standouts.

My favorite journaling app for Mac and iOS. While I love Day One on my desktop machine, it’s the combination of the iPad app and the Mac version that really seals the deal for me.

My personal journal/log entries combined with Slogger give me a great record of the year gone by.

1Password has long been a default install for me, and one of the first to go on any machine or device. The recent release of 1Password 4 for iOS was amazing, improving 1Password in some areas I hadn’t even noticed it was lacking.

1Password on my iPhone is crucial, providing me with the security of un-hackable passwords and the convenience of having them safely stored for easy access. I also keep all of my credit card info and software serial numbers in there, and both are extremely handy to have readily available. With 1Password’s intense security capabilities, I’m comfortable having all of my sensitive data with me on the go.

If you do anything online, I suggest having 1Password in your digital arsenal.

Another must-have for me. TextExpander on my Mac saves me hours of mindlessly retyping the same things over and over, from my email signature to repetitive email responses to a plethora of other cool tricks.

On iOS, TextExpander is primarily limited to the apps that support it, but that list is constantly growing. In any app that supports it, it’s awesome to have all of my Markdown and other snippets available in a couple of keystrokes. 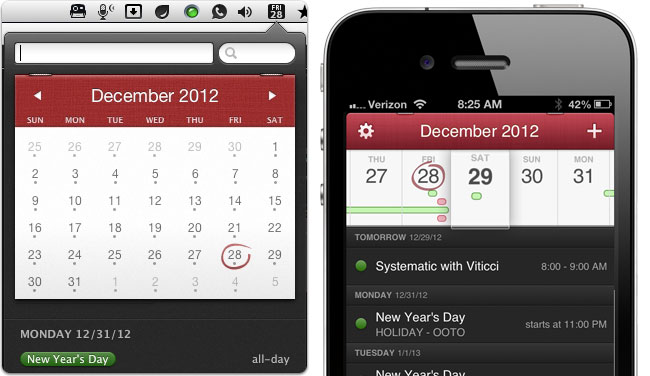 Fantastical has become a complete replacement for Calendar on my Mac, and a very handy tool on my iPhone. With excellent overviews of your schedule, including tasks, it’s a visually impressive substitute. The real magic, though, is in natural language event creation, allowing you to type a sentence describing an event and have the equivalent calendar entry created automatically. 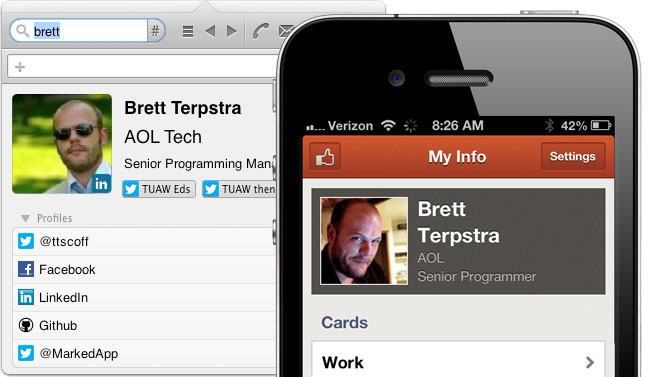 Cobook is another app that’s replaced a default tool for me, in this case Address Book. Cobook is superior to the built-in address book in just about every way, with popup contact access, easy linking to social networks and an elegant system for “tagging” using contact groups. It syncs fully with the system address book and works perfectly with Mail and other applications.

The iOS version syncs seamlessly and is perfect for quickly adding contacts on the go, and for looking up contacts whenever you need them, wherever you are. 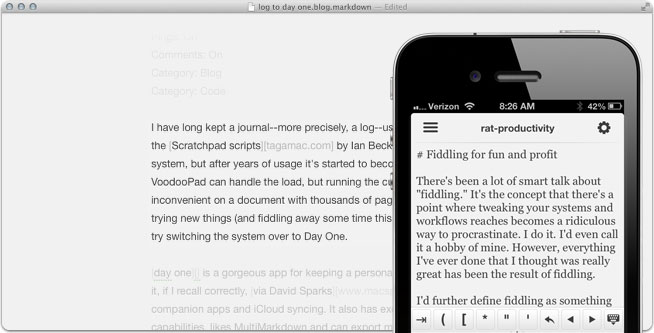 For blogging and short articles, Byword is my favorite tool on Mac and iOS. It provides a simple, distraction-free environment full of powerful shortcuts and Markdown tricks.

I’ve reviewed the Mac version of Byword before, discussed some of its keyboard features and giddily announced the iOS version’s release.

The iOS version is TextExpander-compatible, Dropbox-friendly, and beautiful to work with.

[Byword and Byword for iOS]

I use several mind mapping tools, and it’s hard to pick a favorite. MindNode Pro has versions for both Mac and iOS and is a strong contender. I use it regularly, and the fact that it can import/export OPML files means that it functions well as part of an ever-changing and flexible workflow.

BetterTouchTool is by far one of my favorite utilities. The (free) Mac version extends my Magic Trackpad (and any touch device) capabilities almost endlessly. I can assign intuitive gestures for any action on my Mac.

On iOS, BTT Remote allows me to control desktop applications, trigger scripts and even functions as an iPhone-based trackpad. It’s an excellent addon to any Mac running BetterTouchTool. I reviewed it back in November.

TweetBot has become my default Twitter client on both Mac and iPhone. Its gesture-based features make it the easiest for me to explore and use Twitter with, and its sync capabilities across platforms make it the best choice for checking Twitter on multiple devices.

[TweetBot and TweetBot for iOS]

This year Pocket became my default “read it later” client, letting me quickly store articles and videos for later perusal. It offers a beautiful interface for catching up on news and posts, and a very easy-to-use way to capture and archive them.

[Pocket and Pocket for iOS]

Stay tuned for more apps. Next up: some of my favorite iOS apps.