Here’s a quick tip about two apps that I love: nvALT and Magic Launch. I’m not sure about the project status of Magic Launch, or how it will fare with Mountain Lion, but for now it’s one very useful app. This is more of a multi-tip than a review, but take it as you will.

You probably know of nvALT, so I’ll describe Magic Launch. Magic Launch overrides the default file handlers and processes them based on rules, allowing you to specify conditions under which to launch certain apps when certain filetypes are double-clicked. It’s really handy. For example, you can see my Markdown rules below. 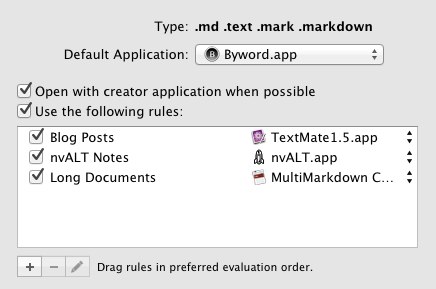 Short files, like this post, are opened in Byword as the default app for the filetype. Longer files are opened in MultiMarkdown Composer, which has a great table of contents feature for navigating while editing. Here’s where nvALT comes in: if the file is in my nvALT notes folder, it opens nvALT and jumps straight to that note. It’s a neat trick if you make use of your note files in ways other than just nvALT. From the command line, instead of open -a nvALT filename.md you can just open filename.md . Not a huge difference, but a nifty tool.

There are a lot more clever things you can do with Magic Launch. If you’ve ever been frustrated with dealing with UTI’s and what file opens what app, here’s a very easy solution. It’s relatively expensive for a utility ($20), so you’ll only be interested if the cost is equal to or greater than your frustration with assigning default applications.

Another useful app in the same vein is RCDefault. This one handles all kinds of things, including UTIs and URL handlers. It’s free, and I use both Magic Launch and RCDefault. The primary reason Magic Launch is superior for file handling is conditional rules, which RCDefault doesn’t have. The URL handling is great fun, though, and you can see all of the url handlers assigned by apps on your system. I bet you didn’t even know some of them were available. Have fun.