This is going to be a relatively quick post, and it’s definitely aimed at people who can already find their way around the command line, and probably have a little experience with GeekTool and/or NerdTool as well.

I kind of stumbled on this concept while working on something unrelated. Basically, you pipe output from a shell command into ImageMagick’s convert command as a label, and then manipulate it to get an image you can display on your desktop. It allows for reflections, rotations, gradients and all kinds of fun things you could never do with a shell Geeklet alone. As an experiment, I just wanted a basic reflection, with a little bit of vertical text…

Here’s what I was aiming for: 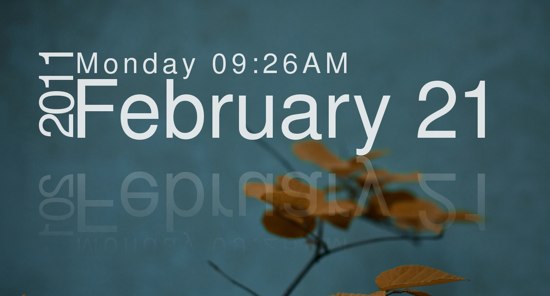 Here’s how I got it:

The script is adapted from one I found at imagemagick.org’s forum, and there’s a good breakdown of how it works at the bottom of the thread.

You should see something like the image above on your desktop now, if all went well. If not, first look for the output file (~/reflected.png) and see if it exists. If it does, check your image geeklet. If it doesn’t, try executing the script on the command line and see what happens (~/scripts/shadow.sh). Any error messages you get will help you start debugging.

There are a lot of fancy things you can do with ImageMagick, but this is what I had time to throw together. Play with the settings, and then find some decent documentation for ImageMagick and do something way cooler!