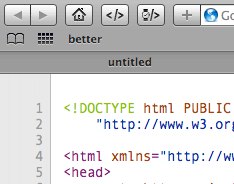 A couple of very cool Safari Extensions came down the pipe today, both geared toward web developers and code monkeys. The two of them combined make viewing source in Safari a whole lot better. I love doing web development in Safari, and the Web Inspector pretty well covers the Firebug front for me, but these two extensions are going to make life much easier.

BetterSource adds two buttons to your toolbar. The first is for viewing the source code of the current page in a new tab, and with line numbers and syntax highlighting. That in itself is a huge improvement over the native source viewer. The second does the same, but with the rendered source (after DOM changes and other javascript fun), which is basically what you get in the Inspector, but with less fuss and easier copying.

Entropy provides the second (actually, a plugin to be placed in ~/Library/Internet Plugins), called the XML View Plugin. It provides a more Firefox-like view of XML data (which Safari fails to display), and also formats JSON data for easy viewing. For anyone who works with API’s and consumes web services, this is a great tool and a welcome addition to Safari.